On a deed dated May 3rd, 1818 Philip Quick (now Sr.) and Hannah, his sold his 90-acre portion of the Peter Quick Sr. Plantation Estate to his son Robert Quick for the bargain price of $100 recorded the same day in the courts witnessed by John Banghart and Joseph Mackey.[3]


Less than two months later on January 11th, 1844 Peter Hopler and his wife Johanna and Johanna’s sister Rebecca Aten sold to Robert Quick 120 acres containing 2/9 of the Homestead Estate of Philip Quick Sr. for $277.33 and recorded January 29th, 1846.[14] The same day Robert sold Peter Hopler and his wife Johanna 2 ½ acres of Philip Quick’s land for $25 and it was not recorded until May 30th, 1850.


During the court proceedings on September 4th, 1845 David B. Quick, son of Philip Quick Jr. was a sworn as a witness. Other witnesses include; Robert Quick’s son John Quick and son-in-law Benjamin Tims. The plaintiff won the case and was awarded $385.77.[17]


John K. Quick son of Robert Quick was a Democratic candidate for Sherriff and racked up a $30,000 of debt under the endorsement of his father and others. From the scandal, John skipped town and Robert was served his son's debts. In despair, Robert committed suicide by hanging himself in his barn.[18] After Roberts's death, George Titman became the administrator of Robert’s Estate and all of his lands were written off to pay his debtors at the time totaled $22,000 on Oct 18th, 1867.[19]

On March 13th, 1868 William Mackey purchased 14 acres of woodland for $311.74 from George Titman Administrator of the Estate of Robert Quick.[22]

The debts were cleared from the estate on August 11th, 1871 “The several claims and demands of John Anderson, Levi, Mackey & Abraham McMurtrio against the Estate of Robert Quick deceased having been excepted top by Philip Quick & others next of kin and creditors of said Estate and George Titman Administrator of said deceased”[24]


On February 5th, 1894 Issac Hay’s widow Margaret Hay along with Theodore Hopler and his wife (Theodore Hopler was a great-grandson to Philip Quick Sr.) sold the Robert Quick Estate to George K. Fulmer.[25] 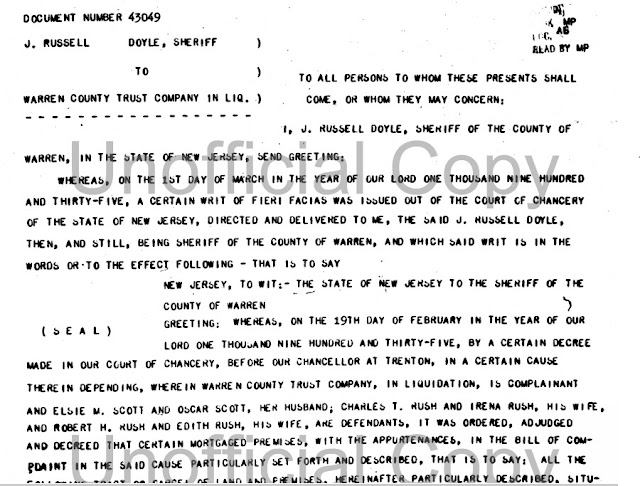 On June 3rd, 1935 the Warren County Trust in Liquidation sold the Homestead Farm of the Robert Quick Estate to Wilbert Stires and Wife for $1 and it was recorded June 7th, 1935.[28] 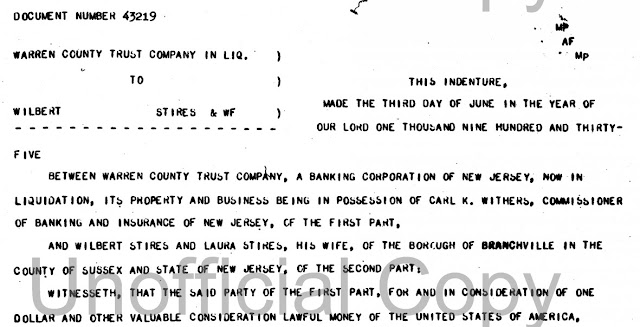 On July 20th, 1939 Wilbert Stiles and Wife sold the Robert Quick Estate (Tract No. 1) to Clyde Parcelle for $1 and the deed was recorded July 7th, 1939. This was part of a four-tract estate of which the Robert Quick was only one part. Some of the lands were once owned by Robert Quick’s father Philip Quick Sr. and Grandfather Peter Quick Sr.[29] 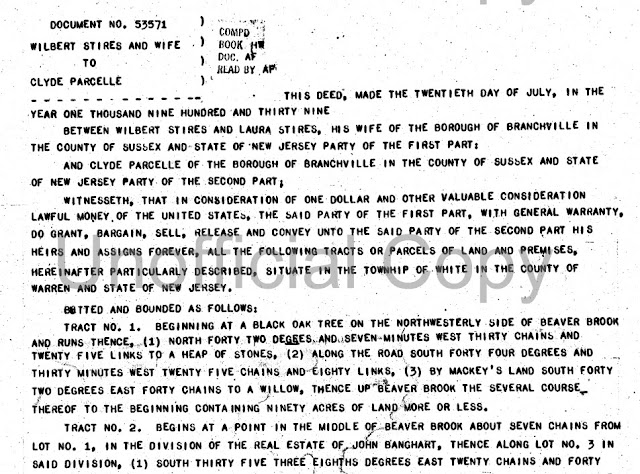 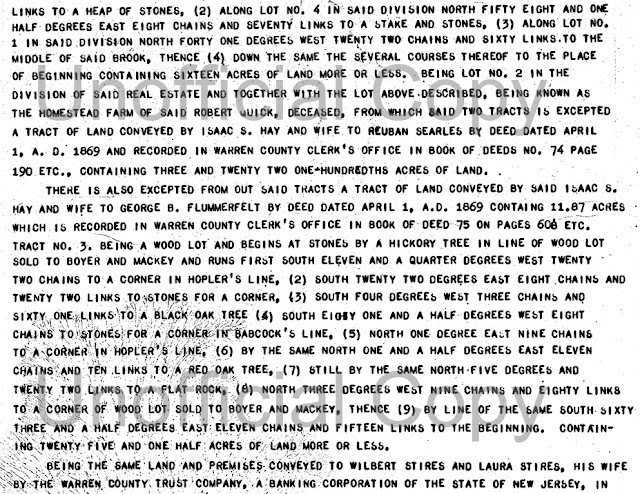 The Clyde Parcelle transaction did not work out and Wilbert Stires and his wife Laura sold the land to Gustave A. Tetz in 1945 and the deed was recorded April 4th, 1945. There was an assignment of Mortgage valued at $4000.[30} 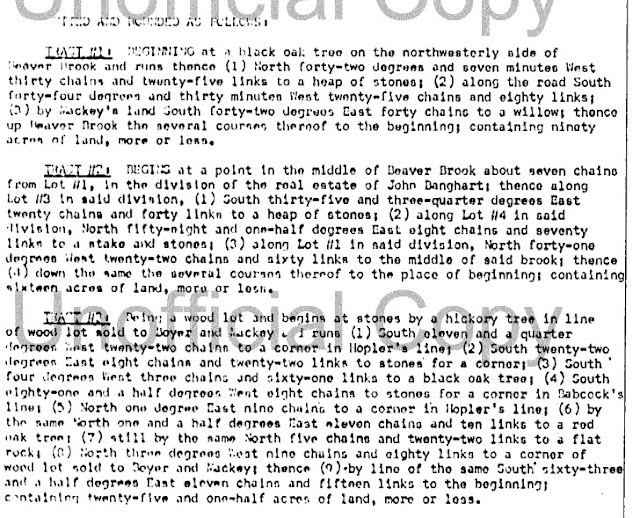 Rocky Hill Land Co. was a mining Company that merged with Trap Rock Industries that mined diabase rock a type of basalt. In 1966 on a deed recorded on September 29th, 1966 the land was combined with another land transaction in the area and slated to be mined in the future.[32] The land sat unused for 33 years and Trap Rock Industries sold the land to the State Of New Jersey’s Environmental Protection Agency for $1.6 million dollars on April 5th, 1999.[33] This land became the Beaver Brook Wildlife Management Area.


Peter Quick Estate Division of Land on initiated in the Surrogate’s Court by James and Samuel Quick sons of Peter. Peter’s Estate was purchased by their brothers Philip Sr., Peter Jr. and Manuel and James and Samuel were left out.[36]