Oostzaan is just north of Amsterdam across the River Ij that has a sheltered harbor and easy access to the Atlantic. In about 1640 a certain Jacob Quick and his son Pieter lived there. Jacob was a (skipper) sea- captain that owned his own ship. The famous pirate "Claes Gerriszoon Compaen" boarded Jacob’s ship carrying 5000 guilders of cargo en-route from Guinea. Claes was Jacob’s neighbor in Oostzaan and made him pay a small fee and then let Jacob and his ship go. Claes was also a close friend of Thomas Wentworth the 1st Earl of Strafford and captured over 300 ships in his pirating career, he died in 1660. [1]

In Amsterdam, there is a property on Gr. Bickerstraat No. 25, called “Qvickenbvurch” "Quickenburgh." [see plaque below] A Land record on May 20, 1667, shows an Adriaen Theunisz Vlamingh shows becoming the owner of this property by decree letter, the seller was Pieter Jacobsz Quickenburgh b. 1629. The façade is explained by this Pieter Jacobsz Quickenburgh, who settled his house in 1652 on a vacant estate on the Bickerseiland. The dutch genealogist, Mr. G. J. Honig in Zaandijk stated, “no other children from the East German merchant Jacob Pieterst Quick has found his marriage to Grietje Pieters than Pieter born in 1629 and Mary born in 1632. However, Pieter Jacobsz Quick, who built the house on the Bickerseiland, have been a son of this Jacob and probably from an earlier marriage. This is evidenced by a note in the Transport Register banne Oostzanen (Vol 63 pg 421):8. In March 8, 1639 sold Jacob Pietersz Quick and Pieter Jacobsz, his son, both living in Amsterdam, together with the guardians of Jacob's unborn children at Outgert Luytsz, old mayor of Oostzaan, a piece of land in the Suydendt for 1741 gl. and on Teunis Symonsz a house and site there for 1490 gl.” [2 translated]

Arthur C. Quick, in his book, leaned towards the Quick family being from Scotland as descendants of a garrisoned soldier in Naarden. First and foremost, Quick is not a Scotch name.[3] The first Scotch troops that arrived in The Netherlands was in late 1587 under Henry Balfour[4] It also would be highly unlikely that the Quicks would be of Scottish extraction when there was a Gerrit Claesz Quijck [see Koptienden Naarden] listed in Naarden in 1548 and the Scotch did not arrive in the Netherlands until late 1587 years after the massacre. We also know from the records presented earlier, that the garrison in Naarden was English. Another strike against Quick being of Scottish descent was Jacobus Quick, Teunis’s eldest son was baptized in a Dutch Kirk (Church) and not the active Scottish one in Amsterdam in 1634.[5]

Quick(e), however, is a decidedly English Surname. A few early records of the name are as follows: Afwardus de Quike, 1179 in Pipe Rolls (Yorks), Robert Quic in Hundred Rolls (Cambs), William Quik, 1282 in Feet of Fines (Essex), Henry Quyk, 1327 in Subsidy Rolls (Rackenford, Devon). Other variants of the surname were Qwik, Quyke, and Qwyke.[3] Quick is common in Cornwall and Devonshire and the common spelling in Devonshire is Quicke with a family pedigree going back to about 1500. The Quicke’s of Newton St. Cyres in Devonshire can trace their family back to John Quick of West Monkton, Sanford Somerset whose son Richard married Elizabeth Bidwell of Newton St. Cyres.[6][7] Richard took over part of the Bidwell Manor and the Quicke family eventually became local Gentry.[8] The present-day Quicke family still holds a small part of the estate and are now in the business of making artisanal cheeses[9][10]

The Quicke family Arms of Newton St. Cyres is what has been used in error in various web pages on the Quick’s from Naarden. The Arms were not granted until 1573 by Robert Cook, Clarenceux.  ARMS: Sa. (black), a chevron vaire or. (yellow) and of the first, between three griffins' heads erased of the second. CREST: A demi antelope arg.(silver), armed, attired, tufted and maned gu. (gold) collared sa. (black), lined or. (yellow)[11] 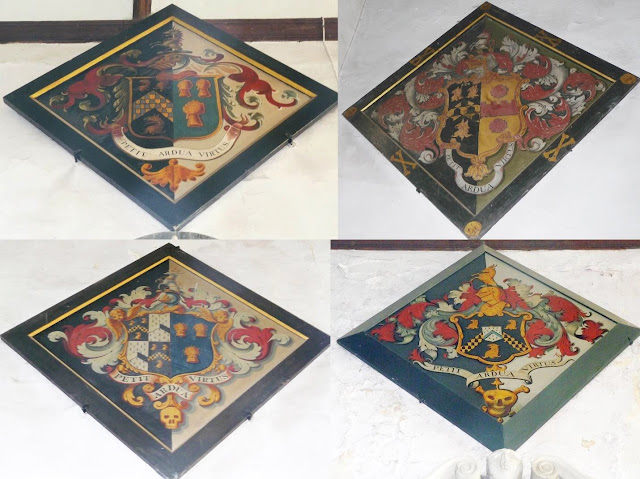 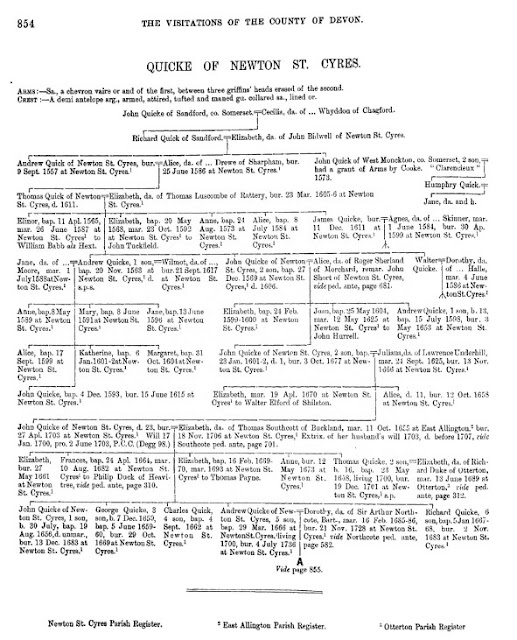 At one time on the Quicke’s cheese website, it stated “The Quicke Family name derives from the Anglo- Saxon tribe called Hwicki, which has a history going back 14 Centuries” I have a copy of the quote but could not find it online or published, but stumbled upon it in a British Cookbook.[12]

The Hwicce were located farther north around the Bath, Birmingham, and Worcester and area so I find this doubtful. The Hwicki, more commonly called “Hwicce” were a mixed Romano-Briton-Celtic-Saxon Kingdom from 577-628 that became a vassal of Mercia by 674. The area was under control of the Celtic- Briton Dobunni tribe (the tribe of witches)[13] before the Romans arrived in AD 60. The area was once governed by Ambrosius Aurelianus[14] a possible King Arthur myth contender. Some of the named Saxon tribes that later settled in the early 500’s were the Arosæten, Feppingas, Stoppingas, Weogoran, Wixan and possibly part of the Magonsæten.[15] They were possibly a group of Belgae west Saxons that were part of the Gewisse that arrived before Cerdic in 519, but this is pure speculation. This early migration of Saxons came into conflict with the remnants of the Romano-Celto-Britons in the area led by Ambrosius. A legendary battle ensued around Bath at a place called Badon Hill. The Celto-Britons won but the Saxons did not give up and eventually settled the area and took over the Celto-Britons by assimilation.[16] It is worth note that Hwicce is thought to be the root of the word of witch due to the ancient druidism that is said to be practiced by the locals with Celto-Britonnic roots up to the Christian times.[17] This root word “wych” to “wyke” then could have been transformed into “Quick” 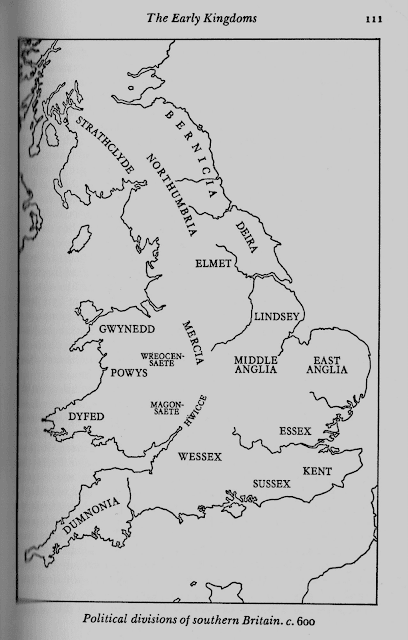 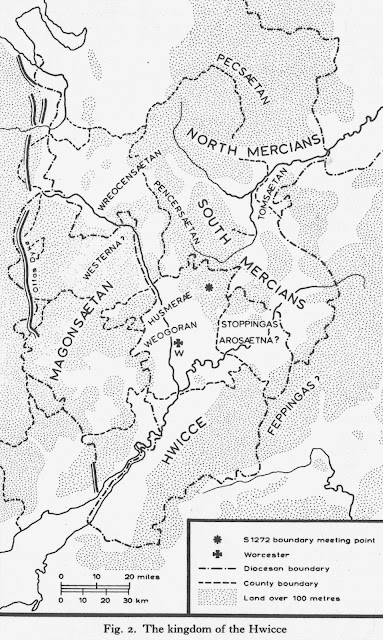 The Quick’s ended up in Somerset in the mid-1300’s from an ancient Manor called Saddleworth-Cum-Quick just west of Manchester, in the ancient County of Yorkshire. The present-day village is called Quick and the first manor was called “The Bold” named after the Lords of the area, the de Bold family. The Manor was split in half and one was called “la Quick”.[18][19] The first to don the Quick Surname was Henry de la Quik, supposed son of Richard de Bold and his is wife Alberta. Alberta was a grand-daughter of a Saxon thane named Tuger Senex (the elder).[20] 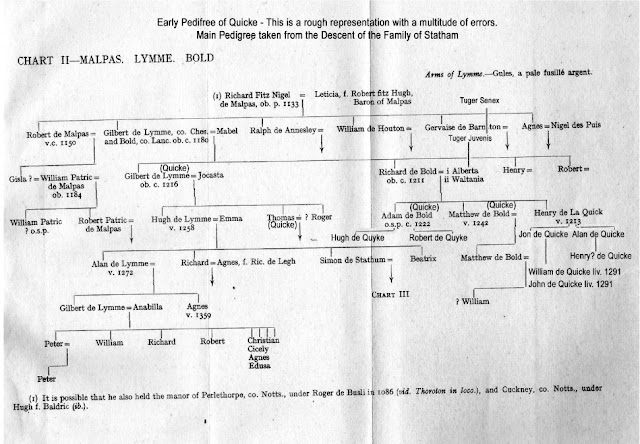 In Somerset the first recorded Quick(e) was Walter Quycke of Brunton in 1389.[21] Brunton was adjacent to Wyke Champlower. Wyke Champflower was named after Thomas de Campo Florido (Champflower) in the reign of Henry II who held the manor of Wyke. It is another possibility that the British Quick(e)s in Devonshire could have it roots from this manor.[22] A few of these Quick(e)s must have slowly migrated into Cornwall. There is a John Quyck living in Sutton prior, now Plymouth in 1401[23] and a cluster of Quicks that dropped the “e” in Trevalgen, St. Ives, & Zennor from 1699 to the present. The Quick family in Cornwall is also part of a local legend that their ancestor, surnamed “Quick”, from Ireland was shipwrecked in 1470 with the families of Stephens and Mitchell at Wick Pool in Zennor.[24]

In relation to the Netherlands it is quite possible that an English Quick(e) went to England as a soldier during the 80-years war or as a Mason to reconstruct the many damaged towns. This Quick(e) could have married a Dutch woman and stayed there. There is one interesting record from England recorded in 1539 of a Thomas Quick, mason from Devon. Thomas was contracted to do the Masonry work building the church in Morebath, Devonshire and is recorded in church records at the time.[25] below]


This surname has had many forms over the years in this area of Flanders. The first record in 1306 is William (Guillaume) van Brouborch Alderman of Ghent in a series of charters in Ypres. William was from Flanders and the surname Brouborch or Bruborch was actually named after Bourbourg, Flanders (France after 1375) close to Calais. In 1311 there is a receipt of a special revenue account of (John) Jehan Quic de Broubourch in Ypres. In 1321 there is a series of records of Lambert (Lammin) le Queke in an audit of land in Dickebusch (Dikkebus) just 5 km southwest of Ypres. His name is also spelled Lambert Quicke, Queke, Queck, Quecq and Queker.[26] The de Quick’s are listed up until the 16th century in the area and many were caught up in the Council of Troubles in 1566 during the 80 years’ war.[27] A Jacques de Quicke de Dickebusch was still living in the area in 1611.[28]

From researching a few charters, it is a strong possibility that this family descends from the French Knight Phillipe de Bourbourg. Phillip was the bailiff of Ypres and Cassel from 1255-56 [29] and Lord of Verlinghem, Flanders (France after 1375) and Lille (now Nord France), Flanders in 1278. Verlinghem was in Sargentry (Fiefdom or vassal) to Guy of Dampierre (Flanders) and Margaret of Flanders.[29] Phillip was listed in the Camden Roll of Arms and died after 1298.[30]


Ypres was later sieged in 1383 as a small part of the Hundred Years War at a time where England had Problems with the Pope. The siege was under guise of a de-facto mini crusade. The battle was the city of Ypres, Flanders, and France vs. Henry le Despencer of England and Rebels from Ghent.[31][32] Ypres survived the attack, but the war took its toll on Flanders and trade shifted northward into the Dutch territories. Due to economic conditions, the population in Ypres went from 20,000 to 7,600 by the early 1400s. It is widely studied that the cities in low countries such as Antwerp, Ypres, and Mechelen lost half of their population and the Cities of Amsterdam, Haarlem, Nijmegan, and Naarden doubled.[33] It is possible that part of the de Quicke family left the Ypres area after 1383 and one of their descendants ended up in Naarden before 1548.


Kortrijk is about 30km west of Ypres. There are a few early records of members of the de Quicke family in early records. Janne de Quicke 1310, Roeger de Quick 1392, and Willem de Quikele 1389.[34]


As stated before, Phillip de Bourbourg held Lille, which is now in Northern France next to Verlinghem, once part of Flanders. What is very interesting is that there is a minor noble French family surnamed Quecq situated in Lille. The earliest records of Quecq being an actual house is about 1600 with Georges Quecq. A few generations later Jean Baptiste François Quecq, lord of the Cherye, born October 17, 1729 in Lille, died February 5, 1794. Jean was a councilor of the King and treasurer of France in the finance office of the Generalitat. [35]