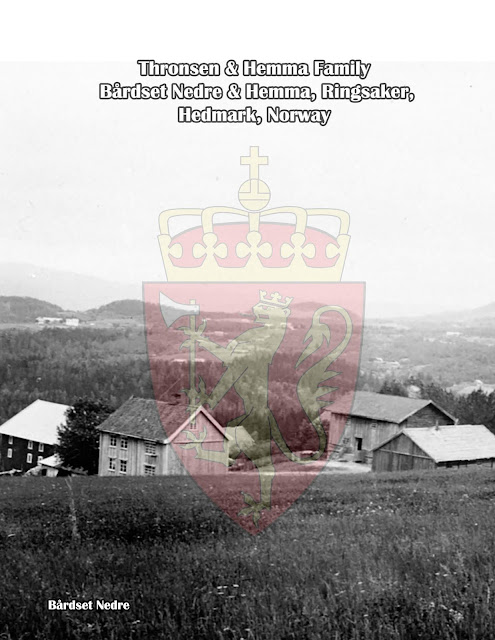 Anders Tronsen Baardseth b. May 27th 1826 married Agnethe Jonsdatter Hemma in 1848. Agnethe was born Jan 22nd at gaard Himma to John Rasmussen Himma and Anne Jensdatter. By 1854 Anders was a Gardmandssøn (Farmer) living at Nedre Aaseneie, now called Nedre Åsen. It was a few miles south-west of gard Nordre Hemma where Agnethe was born, along the shore of Lake Næra in Ringsaker. 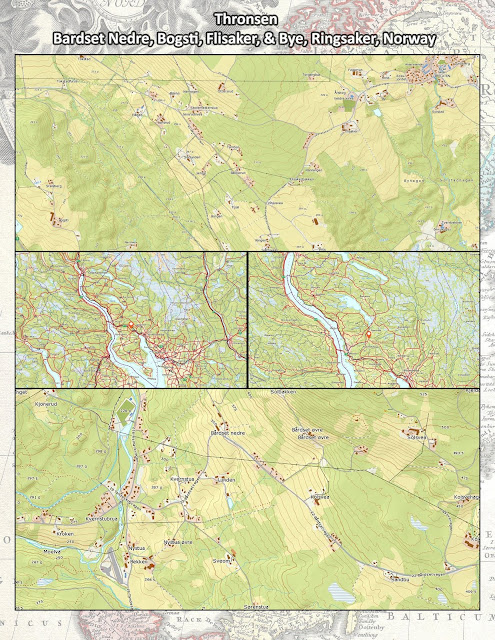 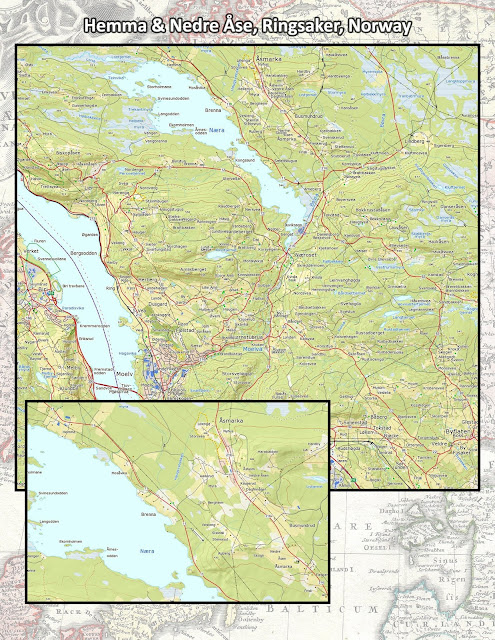 Anders was an even-tempered and kind man. He and his wife worked hard and were getting on very well with their little farm in Norway. The prospered according to the standards of their community and had even been able to afford made to measure shoes. Once a year a cobbler would come to the home and make shoes for everyone in the family.

It was at the urging of Anders’s father, Tron that they came to America. He had friends and relatives go and longed for adventure but was not strong enough to come himself. In March of 1859, Anders and Agnethe set sail for America. At the time they had for four children; Agnetta b. 1848, Anna b. 1851, Ella b 1854. John b. 1857.

They began their journey on the sail ship Nordlyset (Northern Light) and their destination was Quebec. They Reached Quebec at the beginning of June and this journey took six weeks and two days, which was considered good time. This was before steamships which were five times faster. Anders recalled the cost of the trip was $60 for the entire family to Quebec and their final destination and they had to bring their own food. They ate mostly flatbread and mushy meal on the journey. When they arrived in Quebec, they took a canal boat by way of Montreal, across Lake Ontario to Hamilton, then by railroad to Detroit. The train was ferried across the river at Detroit and they proceeded to Grand Haven, Michigan. They crossed Lake Michigan by boat to Milwaukee, then by rail to Prairie du Chien, then by boat up the Mississippi to La Crosse, where an uncle met them (Unknown person) and took them by oxen to Lewis Valley, Trempealeau County, Wisconsin. 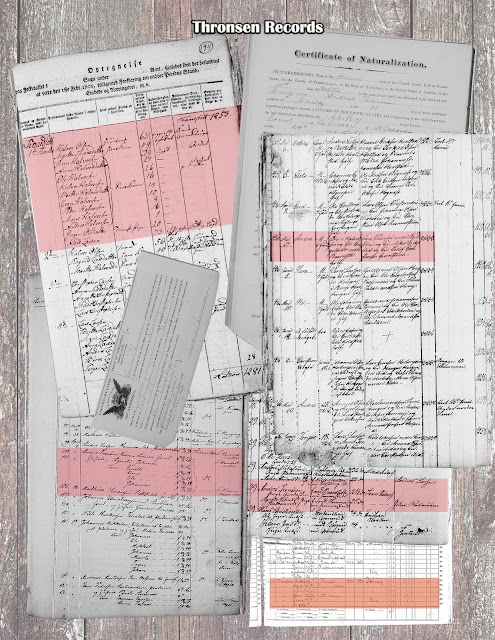 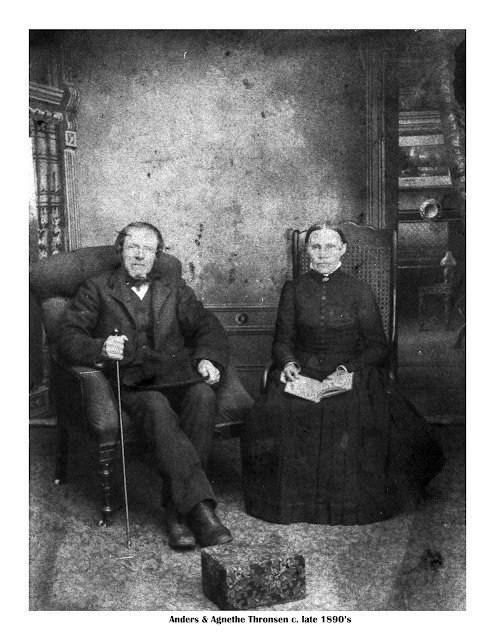 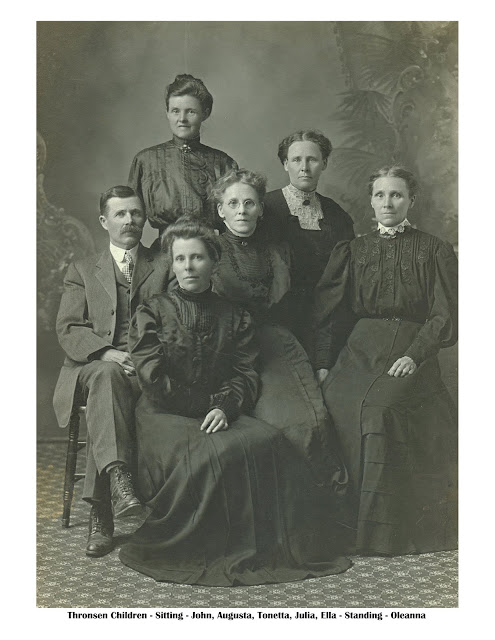 In about 1871 the Tronsen’s and other local families built a schoolhouse for the children to attend and learn reading, writing, and arithmetic. Then in 1862, they organized the Hardies Creek Lutheran Church, and three of the charter members were Mikkel Spidalen, Anders Tronsen, and Amund Emerson Kvisselstuen, and eight additional families. In 1876, the church was built. They also made roads to replace the muddy trails. A stagecoach route then became a reality and made two trips a week to deliver mail to the settlers and on March 30, 1873, the Glasgow Post Office opened its doors.

In 1878 Anders’s son John and Mikkel Spidalen, went to Duel County in Dakota Territory where Anders and Mikkel took a tree claim and John a Homestead. Mikkel married Karen Sagen the brother of Ole. In 1880 Anders and his family left Hardies Creek and migrated west by rail and ox-cart to get to their new Homestead. Anders Lived on the homestead just outside Toronto, Duel County, South Dakota till his death in 1904 and Agnethe in 1906. 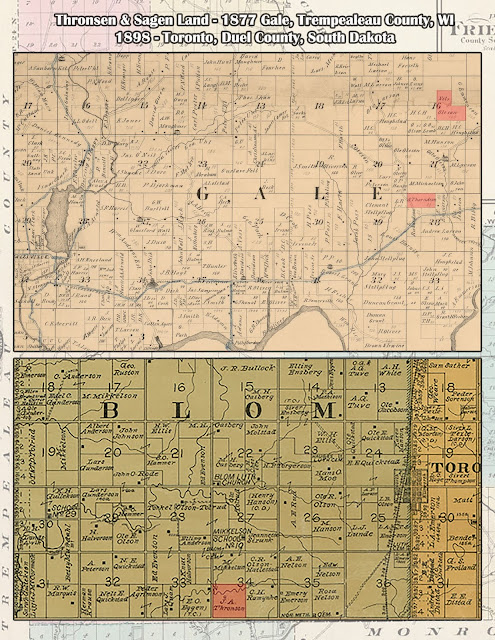 According to family, Anders and Agnethe regretted their decision to move to America. they rarely spoke English and never were truly happy in this country. They were both well-informed, deeply religious, and very involved in whatever community they lived in. Anders was known for his beautiful singing voice and sang two verses of his favorite hymn minutes before his death. The family finished the song at his bedside.

Agnethe also had family move from Norway. Her Brother, Ole Johnsen Hemma b. 1825 lived in Trempealeau and was living with the Sagen Family in Galesville in 1905. Ella Sagen (Thronsen), his niece, (Agnethe’s daughter) was married to O. N. Sagen and was the executor of his estate after he died in 1906. Agnethe also had a sister, Pernille b. 1813 that lived in North Dakota in the same county (Duel)and a brother, Rasmus b. 1819, who lived in Stevenstown, Wisconsin.

While researching the family of Anders Tronsen Baardseth I stumbled across researched documentation that connects Anders to Norwegian Nobility and Royalty. In the Veldre Bygdebok it has farm info for the Bogsti, Bye, Busvol, and Flisaker farms. The ancestry of Ander's great grandparents, Ole Larsen Bogsti and Berte Børresdatter Flisaker both intersect into a family called Bratt. The Bratt farm and family were tied to nobility and governing in Gulbransdalen, and according to the local Bygedegok, a direct line from both his great-grandfather (Ole Larsen Bogsti) and great-grandmother (Berte Børresdatter Flisaker) are directly traceable to King Håkon V.

The Bratt family to King Håkon V ancestry is also published in the books Årbok for Romerike Historielag II, 1956 and Ættesoge for Gudbrandsdalen by Engebret Hougen, 1974. The line is as follows below: 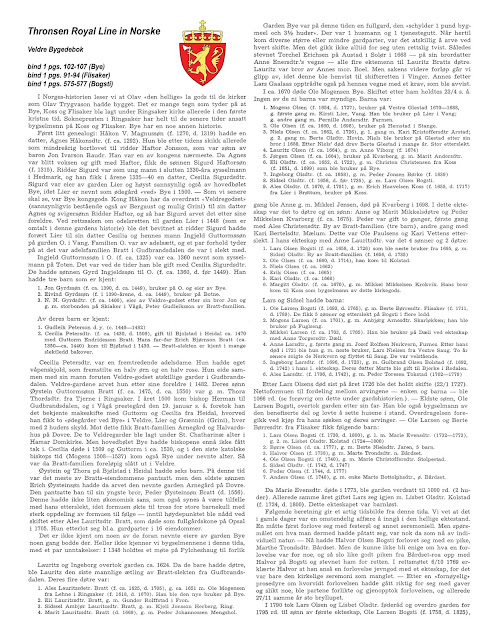 As a genealogist, I am not easily swayed by claims of Royal descent and using somewhat of a scientific method I looked into debunking the line to see if it was valid. From all accounts, the line up to Peder Gudleikssen Skjaak and his daughter Cecelia‘s marriage to Guttorm Endridesson Bratt has been verified by charters and documentation. There was an issue with Anders Nielson Busvol being the son of Niels Anderssen Busvol, but that was corrected by land documents that were recently found verifying the father-son relationship by Lars Ove Wangensteen.

The one area that is still not completely proven is the wife of Peder Gudleikssen Skjakk being a daughter of Ingjeld Guttormssøn O. In 1999 Tore H. Vigerust a Norwegian genealogist wrote in an article, "Adel New", in genealogists 1/99, that “the structure of an unknown daughter of Gyrd Ingjeldson O marrying Peder Gudleiksson Skjaak depends on a highly questionable interpretation of DN III 797 and DN II in 1010” (land documents). 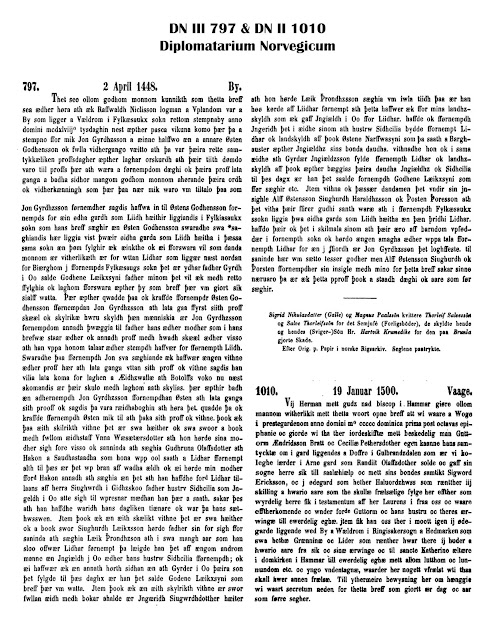 It is my conclusion that the line has not been 100% disproven nor has it been 100% proven but not likely.  We know Anders line goes into Norwegian nobility and the some of the families on the chart from Peder Gudleikssen Skjaak are traceable to the 1200’s. This Royal line has been published in numerous publications since the 1930’s and has recently been the subject of controversy. In 2000, John Bratt Otnes, a citizen of Norway claimed he was the head of the medieval noble family of Bratt and could be the true heir of the King of Norway. This caused a media frenzy in Norway. John traced his lineage using the same identical path to Håkon V as the Thronsen line through Cecelia Pedersdatter. The big difference is huge, John was not a good genealogist and his claim was debunked because professional Genealogists could not trace his ancestry further than 1790. 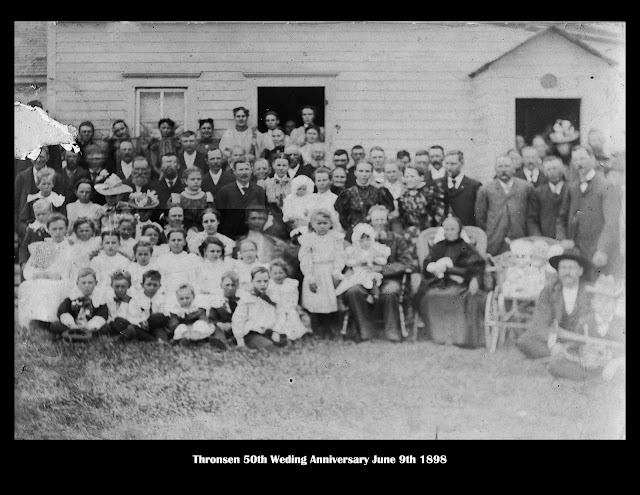 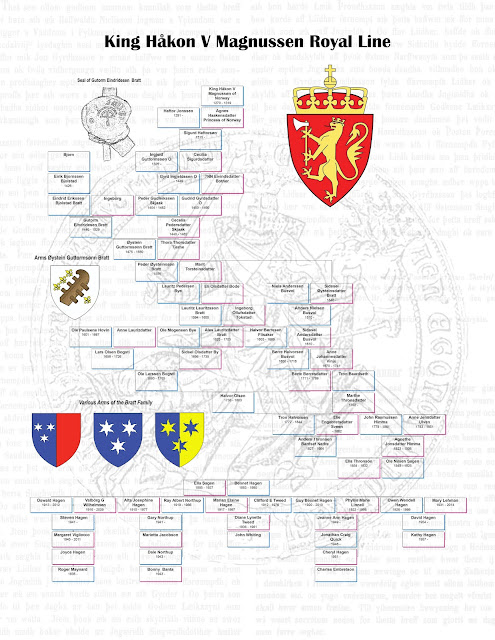