During the 80 Years’ War on Dec 1st, 1572, Spanish troops under the command of Lt. Colonel Juliano Romero, under orders from the Duke of Alva, walked into the city of Naarden after a pre-negotiated surrender with the leaders of the city. The Spanish entered the city and the townsfolk were grouped together for a meeting in the Gast Huis church then shot with muskets. The survivors were run through with swords, and the ones who fled into the bell tower were burned alive when the church was set on fire. The citizens who had fled into the fields were caught and strung up on trees, freezing to death or tortured alive. The Duke of Alva, sent to the Netherlands by the Spanish King, proudly reported that not one child survived. Supposedly out of 900 townsfolk; there were only 50-60 male survivors remaining in Naarden, either by escape or ransom.[1]


In 1574 after the Spanish left, the reconstruction of Naarden began as a fortified city. Its design was a five-bastioned Fortress under the supervision of famous engineer Adriaen Antonisz and by the architect Thomas Tomasz, Burgomaster and cartographer from Haarlem. In 1673 Naarden was reconfigured into a six-bastioned fortress after it was besieged in the Franco-Dutch War.[2] It is interesting to note that the only two records of a Thomas or Anthony right after the destruction of Naarden, are the two builders assigned to reconstruct the fortifications. A little information on the builders is below translated from Dutch. This is one new possible link to the Ancestry of Teunis. The trade of Mason does seem to be fitting with an Engineer or Architect as a father or grandfather.

The cartographer Thomas Thomasz (van Haarlem) was a cartographer, goldsmith, and mayor of Haarlem and he helped engineer the reinforcement of Muiden. Thomas introduced reinforcements in Kampen (1580) and Tiel (1585) and designed the Schenkenschans (1586). When the arrival of the Spanish Armada threatened (1588), he was appointed with the mayors of Alkmaar and the three West Frisian cities.[3] Adriaen Anthonisz (van Metius, Metz) was the designer of fortifications for Naarden and Heusden and was a mathematician. In 1585 Adriaen discovered the ratio of a circle's circumference to its diameter, which would later be called pi.[4]

In 1587 there were soldiers of a handful of nations sent to fight the Spanish, notably the English and Scots. The garrison in Naarden was under the command of Captain Soissons (the fat militia captain) under Colonel Dorp, and the English liaison was Lord Willoughby.[5] In 1588 a majority of the troops in the Naarden garrison were one company of 230 British Foot, sent by the Queen in late 1587. There probably were a few Boors and Walloons, but no records exist to prove their existence. It is recorded that most of the British troops mutinied in 1588 over pay. The British troops were the States' (Dutch States) troops as mercenaries, originally placed there by Count Hohenlohe, though they had long since broken with him and quarreled with the States. The original cause of the quarrel had been the usual one, lack of pay. Over this the now two companies of troops then in Naarden had mutinied early in 1588, along with the other States' garrisons of Medemblik, Heusden, Gorcum, Veere, Geertruidenberg, and Arnemuiden. Like those other garrisons, they had then renounced their allegiance to the States and professed themselves the servants only of the Queen of England, though Elizabeth had given them no encouragement and had refused to take them into her pay.[6][7]8] 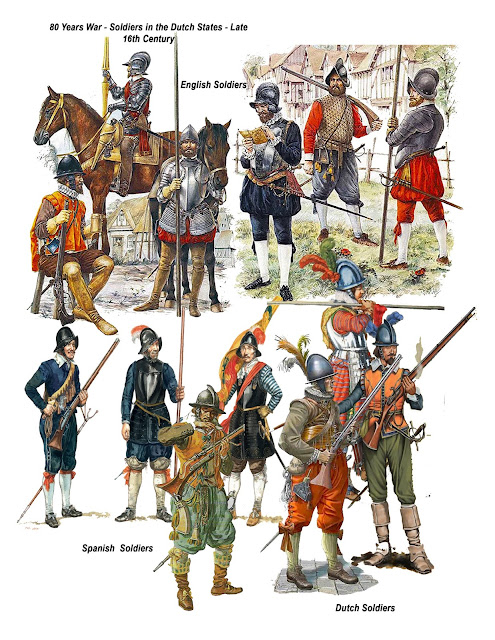 A few years later there was a group of Englishmen under the Separatist Protestant leader, Henry Barlow, that left London in 1593 and made their way to Naarden and finally settled in Amsterdam in 1596. In 1595 the protestant deacon in Naarden Christopher Bowman, was associated to John Paget, a chaplain for a Scots Regiment in Dutch Service. Bowman, was tarred and feathered by his congregation before they left for Amsterdam and was called, “Judas the purse-bearer in Narden” due to receiving money from the burgomasters. The congregation he served was called “de Engelsche van Naerden” or “les Anglois de Nerden”.[9][10]

There are Quick’s documented in the area around Amersfoort from land records stored in of the Abbey of St Paul in Utrect.[12]  The surname Quick is translated from charters and the same records coincide with a family named Quint and tied with the surname “Quint Van Wildeland or Wildelant”. The Quint Van Wildelant family has a small published family tree [13] It is possible that the families are one and the same and seem to have a connection either by marriage or direct descendance. 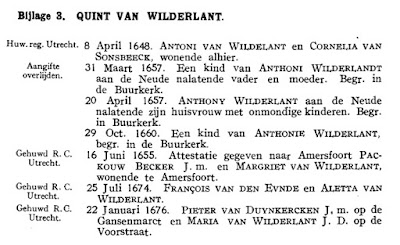